Culture Is The Most Important Product 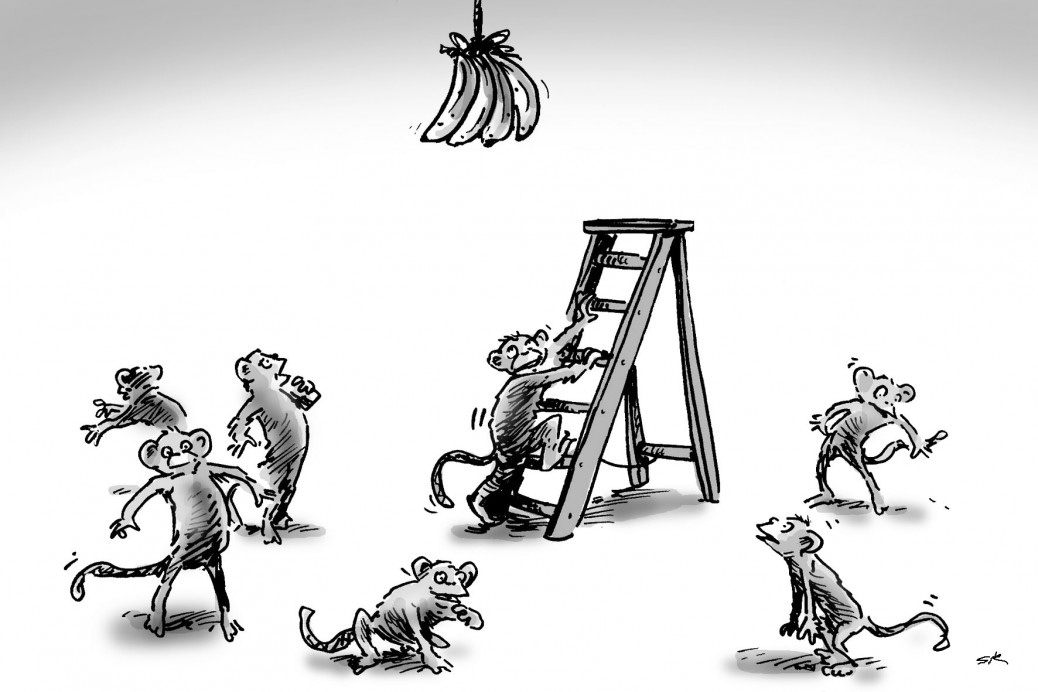 “Scientists started with a cage containing five monkeys. Inside the cage, they hung a banana on a string with a set of stairs placed under it.

Now, the psychologists shut off the cold water, removed one monkey from the cage, and replaced it with a new one. The new monkey saw the banana and started to climb the stairs. To his surprise and horror, all of the other monkeys attacked him. After another attempt and attack, he discovered that if he tried to climb the stairs, he would be assaulted.

Next, they removed another of the original five monkeys and replaced it with a new one. The newcomer went to the stairs and was attacked. The previous newcomer took part in the punishment with enthusiasm!

After replacing all the original monkeys, none of the remaining monkeys had ever been sprayed with cold water. Nevertheless, no monkey ever again approached the stairs to try for the banana. Why not? Because as far as they know that’s the way it’s always been around here.”

Culture is the only sustainable competitive advantage a company can have — it’s what drives innovation and problem-solving.

One of the most unique features of humans as a species is our unique ability to collaborate — work together in large groups with strangers (for more on this I suggest reading Sapiens). Collaboration can lead to innovation by creating new ways (or things) to solve unknown problems to change how the world works. Culture is the oil that greases the collaboration machine. Technology isn’t innovation, it’s the output of innovation. Innovation is knowledge work that comes from how people work together. How we collaborate enables us to see things from new perspectives, reimagine how the world works, make lateral connections between seemingly disparate things, try new thing failing and learning, and the determination to keep going. Culture is the force behind how people behave together that gives us innovation.

Culture also determines If people are happy or unhappy at work based upon how they are treated, managed, promoted or recognized. Culture powers product creation, speed of problem solving, smoothness of operating, legal processes, vendor relationships, how customers feel, as well as the talent you attract (and keep) — in other words culture is everything.

So, what is culture and how do we get it?

I liken culture to an operating system for a group of people that includes the values, principles, and behavioral norms for making decisions — the group’s way of being. And that way of being can be shaped.

Culture as a System

Most company’s software systems evolve organically and haphazardly — hastily cobbled together as the speed of scale takes over, or neglected until they’re breaking and inflexible. They treat culture the same, this is a mistake. If culture is what drives long-term sustainability leaders should put time and effort into culture systems and approach designing them like a product. The goal should be to build scalable systems that enable employees to do their best work, realize the company mission, and be financially sustainable. A minority of companies accomplish this (10% according to The HOW Report by LRN) but those who do are market leaders that people clamor to work for.

Culture is made up of people and systems, each contribute to creating the overall culture of an organization in their own way. The problem is that you can’t control people, but you can influence them to create a shared culture. Through people you can set implicit norms and through systems you set explicit norms.

This is why thinking of culture as a product is key. Leadership behaviors help set implicit norms for how people are treated, who joins and leaves a company, and employee morale. While the systems around recruiting, promotion, and daily management set the tone and measure success (or failure) set the explicit norms of the company culture. Turns out this is hard and when a culture is bad it really sucks!

Different Types of Cultures and Results

One of the best descriptions of company cultures, attributes, and results is from The HOW Report by LRN. There are three basic cultures: Blind Obedience, Informed Acquiescence, and Self-Governance. LRN’s research found that less than 10% of companies have a Self-Governance culture but those that do consistently outperform all other cultures across all KPIs (e.g. increase in market share, employee loyalty, customer satisfaction), no matter the country. This indicates that how we work does matter, and doing it is hard!

(Reference: Charts are from The HOW Report by LRN)

No One Right Culture, but Watch Out for Bad Ones

All happy families are alike; each unhappy family is unhappy in its own way — Leo Tolstoy

There is not one right culture but good cultures tend to share similarities. They are high performing so they meet their financial goals, their odds of long-term sustainability increase, their products/services improve peoples’ lives, and employees stay longer because they are happy (i.e. productive and fulfilled). They are typically lead by great teams (vs. great individuals), overcome seemingly impossible challenges, and people go on to build more great things with colleagues. Healthy cultures are characterized by psychological safety, comradery, fun, and challenge. Unfortunately, it seems bad cultures are more common and there are an infinite set of flavors on that menu.

In an absolute sense cultures are bad because they have unhealthy characteristics that are cause harm to employees. These are typically lead by narcissists, lairs, and cheats that operate in selfish and self-centered ways. You know what this is like. Working in a toxic culture (e.g. Uber) can make one feel like they are being abused or in a relationship with a crazy person (e.g. Trump White House). Like any bad relationship, it’s best to just get out.

Other times bad cultures are a results of the compounding effects of unchecked human nature. Typically we see it in the form of the 7 deadly sins — greed (profits over people), ego (abusive behavior), lust (harassment), envy (backstabbing politics), sloth (poor quality work), and of course pride (I’m the greatest). We’ve all seen it, some of us have been it. It sucks, it drains people and leads to the erosion in talent, operating capabilities decline, customer service drops, product innovations are slow, and ultimately there’s financial decline.

In my experience this all comes down to the role of leadership. How the leader(s) at the top behave and prioritize designing culture will determine what the culture will be.

When you go to build a company everyone will talk about financing, product market fit, scaling operations, etc. All of these matter. But behind each of them are people doing the work. And all people wrestle with the human condition — the struggle of living with your own flaws and dealing with flawed people.

The hardest part of leadership is the fact that you can’t make anyone do anything so you have to persuade them. So early on culture is often a derivation of the way founder(s) treat people, make decisions, and communicate with others. That means if you are the founder one of the things you have to do is thoughtfully design the explicit culture system and live in a way that is an example for the implicit culture system. Despite your own human condition.

What you do sets the tone and bar for how people behave. And people are persuaded by leaders who give a purpose, treat people with dignity, and display integrity — what you say, is what you do, is what you mean (recommend reading HBR: Why Should Anyone be Led by You?). So if you’re a founder or executive and want to build a lasting company it’s important to reflect upon what you struggle with and need to improve in yourself in order get others to be to follow you.

Do you want to be Adam Neumann of WeWork or Tony Hseih of Zappos?

You’ll Know It When You See It

There are many examples of great culture, and what appeals to you might vary from the next person. But the thing I can say is that you’ll know great culture when you see it. There’s a “je ne sais quoi” about it. The example I’ve found that captures the essence of this, the hard work it takes, and the amazing outcomes it can produce is the movie The Pixar Story.

COVID-19 Got You Off Balance. How’s Your Morning Routine?

A Guide To Startup Life

Why Crypto Matters: Evolution of the Global Financial Ecosystem